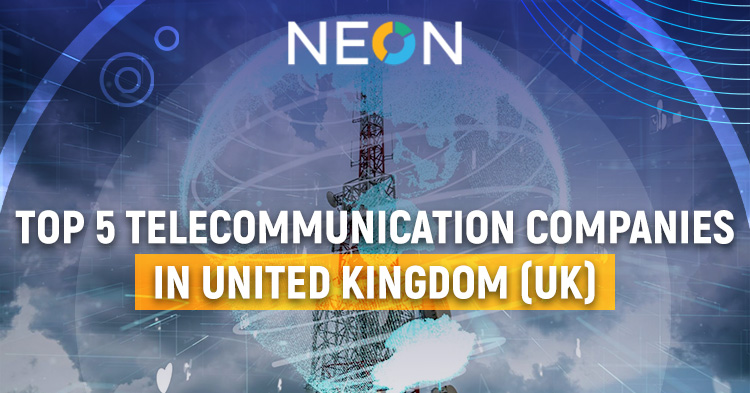 Get a Free Demo

What is Telecommunications Company?

They are typically divided up into three categories:

There are now many more than there were 20 years ago when BT was only available for landlines or 15 years ago when mobile phones were expensive and low-quality. The competitive nature of the telecommunications market means that consumers now have more choices than ever before about their provider, which means they can get better value for money from their provider.

Scope Of Telecom Companies In The UK!

Though not as big as the telecoms mentioned above, they still play an essential role. They provide home broadband to those who want to avoid being tied to a particular package or avoid signing up for long contracts. In addition, numerous independent retailers offer phone packages for consumers at competitive prices.

List of Top Five Telecom Firms in the UK

Here is the list of telecom service providers in the UK.

Vodafone is one of the world's largest mobile telecommunications companies. Currently, Vodafone operates networks in 22 countries, with 48 additional countries having partner networks. As a result, over 150 countries can access the company's global enterprise division, which offers telephony and IT services to corporations.

As of November 2021, Vodafone ranked third among the UK's mobile network operators, behind EE and O2, and Three. In the UK, it has 16.9 million subscribers. The company was established in 1984 by Gerry Whent and Ernest Harrison. Originally called Racal-Vodafone (Holdings) Ltd, the company name was changed to Vodafone Group.

O2 is a telecommunications company founded in 1985. The O2 Group, a British telecommunications company, headquartered in Slough, is legally known as Telefonica UK Limited. The company operates under the O2 brand. It is owned 50:50 by Telefónica and Liberty Global through Virgin Media O2. This company provides mobile, broadband, and landline services to customers across Britain. It has 31.3 million subscribers as of September 2021 and employs over 6500 people.

Be Un Limited in the UK provides internet services; O2 purchased it in June 2006 for £50 million. In October 2007, O2 launched a separate O2-branded broadband service using the Be network, keeping the Be brand. According to O2, six masts installed in Slough demonstrated a 4G connection using LTE technology on 15 December 2009.

As a result of Huawei's technology, they achieved a peak downlink rate of 150 Mbps. In addition, by launching Europe's largest free Wi-Fi zone and offering free Wi-Fi access in and around every O2 store in January 2012, O2 plans to provide free internet to millions of residents and visitors in central London.

Everything Everywhere, also known as EE, is a telecommunications company that provides wireless and mobile phone services. The company was established in 2010. The company has 26.1 million subscribers as of September 2021, making it the second-largest mobile network operator in Telecommunications Companies UK.

Now EE has offices in London, Bristol, Darlington, Sunderland, Greenock, Merthyr Tydfil, North Tyneside, Plymouth, and Leeds, as well as Hatfield, England. A combination of EE's 5G, 4G, and 2G networks covers over 99% of the UK population, including double-speed 4G coverage for 80% and 3G coverage for 98%.

Intelligent number technology, launched by EE on 11 June 2018, allows customers to use the same number across a wide range of devices, such as smartphones, tablets, smartwatches, and laptops. In addition to being free of charge, it is part of the company's strategy to attract and retain customers. By April 2015, EE had 900,000 broadband subscribers, having inherited Orange UK broadband service.

BSkyB, also known as Sky, is one of Europe's largest television and broadband service providers. According to their website, they have an estimated 12.7 million customers across the UK. With a large subscriber base, it's no wonder that BSkyB has been crowned as one of the most successful Telecommunications Companies in London, with a value of billion of pounds sterling.

According to Sky Group, Paramount+ is set to launch by 2022 in the United Kingdom, Ireland, Italy, Germany, Switzerland, and Austria as a joint venture between the company and ViacomCBS. The company has its headquarters in London, UK. Paramount+ will launch for Sky customers in Ireland and the United Kingdom on 22 June 2022, according to an announcement on 3 May 2022.

Since December 2012, 92% of TalkTalk's customers have been unbundled, a process known as local-loop-unbundling (LLU). As a result, TalkTalk became, after Virgin Media, the UK's second quadruple play service, offering TV, broadband, phone, and mobile services simultaneously. There are no longer mobile contracts offered by the company (end of 2018); existing customers are referred to register with another provider.

The Importance of a Telecom Billing Software for Telecom Companies

A billing system is one of the essential features of any Telecom company. This is because it allows customers to pay their bills and helps companies track who owes them money and how much they owe. It also allows companies with invoicing, which helps them better manage their cash flow. Without an effective telecom billing system, there would be no way for the telecoms to know when someone has paid their bill or what services are used by individual customers.

In addition to helping with customer management, telecom billing software allows employees within the company to work more efficiently and smoothly. For example, if a client owes money to their account, an employee can input that information into the billing software so that they can send out an invoice.